Rodney Flunder is the President and caretaker of Holy Trinity, Romanian Orthodox Church in MacNutt, Saskatchewan.  Her also plays the guitar and is the lead singer of the Old Country Lads. The Old Country Lads is a band based in Yorkton, Saskatchewan. The other members of the band are Lorne Procyshen, Stan Popowich, and Orville Drobot. In addition to Rodney’s vocals and guitar, they have a violin, an accordion, tsymbaly, and a rhythm guitar.

One of the main events at which the Old Country Lads play is the Traditional Malanka at the Ukrainian Orthodox Church in Yorkton. Other bands such as the Ukrainian Old Timers from Winnipeg sometimes perform at this event also. During the Malanka, Rodney’s band plays at the door and greets people as they arrive. During the dinner, they walk around and sing carols to everyone. The dinner is followed by dancing. First a Ukrainian Dance group performs. Then everyone forms a circle around the outside of the dance floor for the traditional New Year’s celebration. In the middle of the circle, there is a young boy and a young girl, both dressed in Ukrainian outfits. They walk around and place wheat into the hands of all of the people in attendance. The band then plays a special a New Year’s song and the dancing begins. 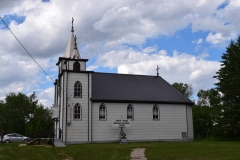 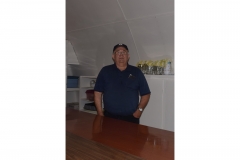 Anne and Bill Sewchuk are members of the Dormition of the Theotokos, Russo Orthodox Church in MacNutt, Saskatchewan. Anne knows many ways to protect against storms. She says that you can use candles, water, pussy willows, or a cross. These are all specially blessed items. Candles are blessed during Sretenia or Candlemass. Water is blessed during her church’s Praznyk or during Yordan, also called the Theophany and the Epiphany. Anne takes water blessed in church home. There she uses it to bless the buildings on her farm. She keeps some to drink should she or another family member become ill. Pussy willows are blessed on Palm or Pussy willow Sunday, the Sunday before Easter. After the service, there is a tradition for parishioners to take pussy willows and gently hit each other saying, “It is not I who strike you: it is the pussy willow that strikes you!  In one week it will be Paska!” Pussy willows blessed in church are then taken home and placed behind an icon.

All items blessed in church can be used for protection during a storm. Blessed pussy willows and blessed candles can be burned.  Water blessed in church can be used to bless the yard. Of course, one can also use a cross.  Anne remembers one time in particular when she used water, candles, and a cross to turn away hail. There was a large cloud forming on the horizon and moving toward her farm. She took the cross and holy water and blessed the yard in all directions. Sure enough, the cloud divided. One part of the cloud went north. It passed by the church and tore down trees; it took a neighbour’s shed away. It hailed at the neighbour’s, and Anne and her children could see the hail and hear it hit the tin roof of a shed. Over their house, however, there was nothing but sunshine. 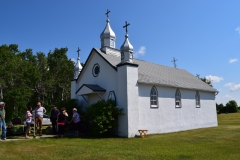 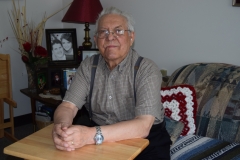 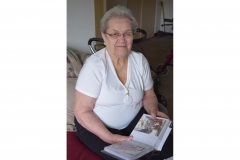 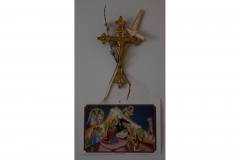