A full church calendar has many saint’s days and holidays. Even large urban churches do not mark all of them. Rural churches, with their lack of clergy, can celebrate only the most major holidays.

The research and documentation of the Sanctuary Project was performed in the summer and the team did not have the opportunity to return in the winter to watch Christmas celebrations.

Christmas Because Christmas comes in winter when rural roads are difficult to navigate, Christmas services are held in one of the larger churches in a rural priest’s circuit. Those members who can make it attend. Most of the celebrating that goes with Christmas takes place in the home and in the community. Relatives who have moved away but who can visit parents or grandparents living in rural areas do so. 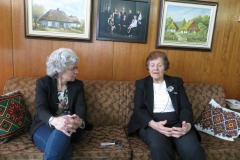 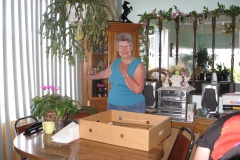 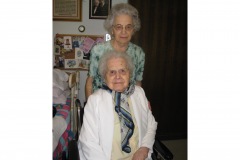 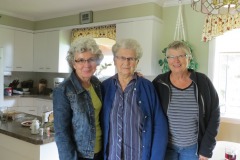 The Christmas Eve meal
All respondents who spoke about Christmas described the Christmas Eve meal. This is the big family event of the season. People try to make 12 Lenten (meaning meat-free) dishes for this meal. Kutiia, a dish made with whole wheat berries, honey, and sometimes raisins and/or nuts is obligatory and many respondents mentioned their father or grandfather throwing it against the ceiling to predict the harvest for the coming year: a large amount of kutiia sticking to the ceiling meant an ample harvest and a small amount meant a poor yield. A compote of dried fruit often went with the kutiia. Other dishes were typically nachynka or mamalyha – a cornmeal mush. Dishes of mashed broad beans were served, as were pyrohy, meatless holubtsi, beet holubtsi, and sometimes fish. Mushrooms, often mushrooms gathered by the family, were a frequently mentioned treat. Doris Kule, shown below at a cemetery near her old family home, described the mamalyha she had at her Christmas Eve supper. 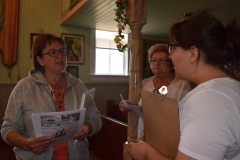 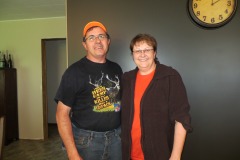 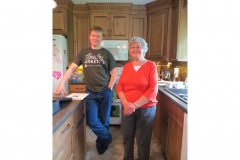 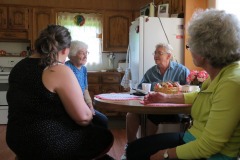 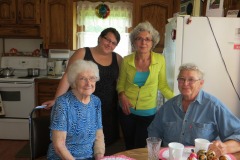 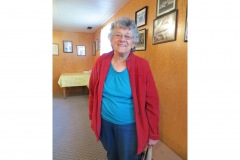 Respondents remembered many rituals connected to the Christmas Eve meal, only some of which are practiced currently. One was fasting all day and waiting for the evening star to begin eating. The youngest child was sent to look for the first star, the signal that the meal could begin. A number of people mentioned having a didukh, a sheaf of wheat, set in the icon corner. Still more remembered hay being placed under the table. In the hay would be candy and nuts for the children. Placing a treat into the hay under the table was so important that one respondent remembers his father insisting on going into town in very bad weather so that he could get some candy to treat his grandchildren. While making or purchasing a didukh does occur now, the straw under the table is no longer a common practice. Carolling was widely practiced and was often used as a fundraiser for the church. Carolling was typically done by young adults who would receive drinks and snacks in addition to donations for the church. Because of the depopulation of the prairies, people now carol in a few areas only. Also, carollers are now people of all ages. The activity is not limited to young adults and some respondents mentioned needing an old person as part of the group because it was that person who knew the Ukrainian words to carols. With the aging, not only of the carollers, but also the parishioners for whom they sing, some groups will make a point of going to retirement homes to cheer up the residents. House-to-house carolling is rare. Below is the star people carried when they went carolling. Wishing prosperity to friends and relatives. While carolling was practiced primarily by young adults and people of all ages now participate in carolling groups, children enjoyed the special ritual of “siiaty,” which translates as sowing grain. They would go to the home of their grandparents or other relatives, such as aunts and uncles, throw grain on the floor and recite a little ditty. The grain plus recitation was supposed to ensure an ample harvest. Children then received payment for their “service,” usually small coins. This money was theirs to keep (it did not need to be turned over to the church) and a great many people remember this ritual fondly. Malanka This is essentially a New Year’s Eve party. It occurs on December 31 in those parishes which follow the Gregorian calendar and on January 13 for those parishes that follow the old, or Julian, calendar. The dates are often modified for convenience to fall on the closest weekend. This is not a religious event. In many churches, it is a fundraising event with dinner and entertainment that brings in outsiders as well as parishioners. In a number of areas, it is an event that allows local children’s dance groups to display their talents.
When Malanka was celebrated in a more traditional manner and for the members of the parish only, it was a comic costume display and the attendees would sit around the periphery of the church hall while masqueraders paraded past them in a set of standard costumes including that of a old man (the old year), sometimes accompanied by an old woman, a baby (the new year, usually a very large man dressed as a baby and pushed in a stroller), a devil, a moneylender, a goat, and so forth. In addition to getting a laugh from looking at the costumes, those in attendance would try to guess who was dressed as which figure. While many people remember this type of Malanka and some parishes, including small ones, still have their Malanka costumes, most small rural churches cannot hold a Malanka event now. Steve Rudy, shown below with his wife Mary, came up with a big Malanka fundraiser for his church. 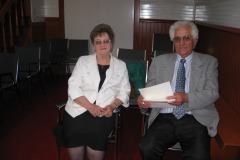 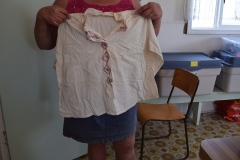 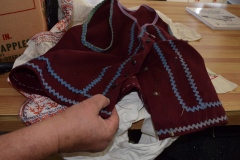 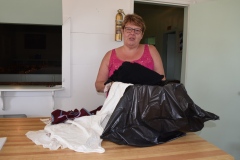 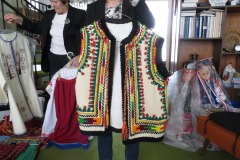 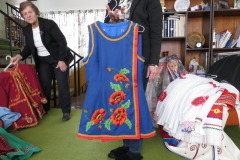 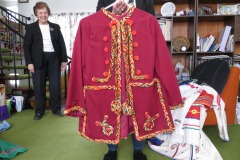 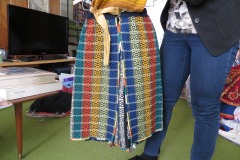 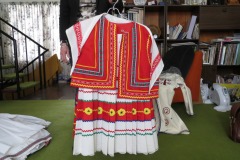 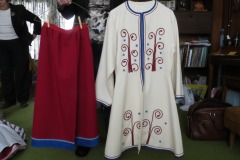 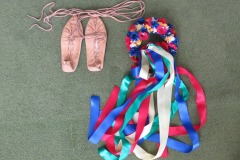