The Sts. Peter and Paul Ukrainian Orthodox Church in Fenwood, SK is a designated federal heritage site. Bunny Halyk reflects on a beautiful service held in 2005 to mark the 100th anniversary of the church. The church has been closed since 1964, but in 2005, around 80 people attended the special anniversary service. They packed into the church and walked with the priest as he blessed the graves. They had tents set up outside and, after the service, they spent the entire day celebrating.

A commemorative plaque at the church reads:
“Erected in 1905 as a Kenningsberg school, this building was purchased in 1914 and registered as a Ruthenian Presbyterian Church and in 1916 renovations were undertaken, and in 1918 the congregation sought membership with the newly formed, Ukrainian Greek Orthodox Church of Canada. July 12th 1920 the church and the cemetery were blessed and consecrated; thereafter they were referred after their adopted patron saints. The last service was held in 1964.” 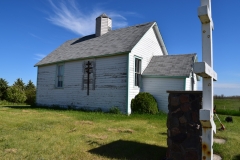 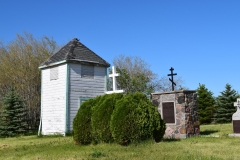