In the graveyard of the Exultation of the Holy Cross Ukrainian Catholic Church, in Hubbard, SK there is the grave of a Redemptorist priest named Fr. Henrick Budz(sp). He was not a Ukrainian. Rather, he was one of the earliest Redemptorist fathers and he came from Belgium around 1914. People remember him because of his ministry to the afflicted. During the Spanish Flu epidemic that hit Canada in 1918 and 1919, he did not seek to protect himself. Instead, he would go to the houses of the sick to speak to them and comfort them. On one of his trips to see the suffering, he himself contracted the flu and passed away. He was buried in Hubbard and people go to his grave to seek help when they have health problems. Emma Parfeniuk says that, when she was sick, she started to go to his grave and pray to him. She claims that it is only through his intervention that she is alive today. People in the area around Hubbard are now trying to have Father Budz declared a saint. 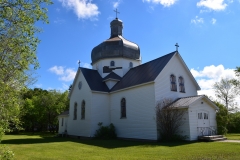 Here Emma Parfeniuk talks about the death of Fr. Budz