Jim Huziak and his brother Mike were known for their work on many prairie churches. Mike did most of the carpentry, while Jim’s specialty was painting. Jim’s family is not sure how he learned to paint, but they think he learned on his own, possibly with the help of a few books. Jim used oil paints and stencils to create the beautiful decorative works in churches all over Saskatchewan.

Jim and Ann Huziak met in 1940. Jim came to paint Ann’s church in Rama, Saskatchewan. And there she was, standing on a ladder up in the choir loft washing the walls so that he could paint them. She dropped the rag she was using and came down from her ladder to retrieve it. Just as this happened, Jim was on his way up the stairs to the choir loft. He picked up the rag for Ann, put his arms around her and kissed her. Jim and Ann were married six months later.

The couple then became a church-painting team. Ann did the plain painting, doing the solid, background colour, while Jim did all of the stenciling and detailing. The stencils were made out of thick, stiff, waxy stencil paper and were held in place by hand because Jim did not have any tape that he could use to attach his stencils. Jim drew and cut all of his own stencils, making his work all the more impressive. Even after the couple started their family, they still continued to paint churches, bringing their children with them. Sometimes Ann would work, even climbing ladders, with an infant strapped to her body. Ann and Jim enjoyed over 55 years together before Jim passed away in 1996.

In addition to being a great painter, Jim was also a talented violin-maker. In October of 2014, the Godfrey Dean Art Gallery in Yorkton, Saskatchewan curated a show of Jim’s violins. There was also a concert put on at St. Andrew’s United Church. The violins were played by members of the Regina Symphony. Jim’s daughter said that it was always Jim’s dream to someday have his violins played in a church. More information about these violins can be found at http://www.huziak.ca. 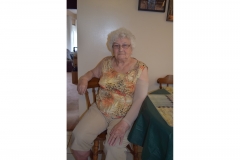 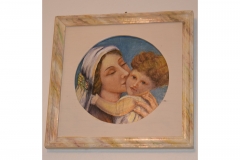 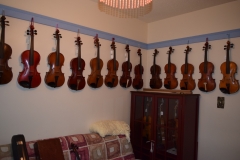